…right about now I understand the hatred, or at least the general disdain for the so-called experts.

Once upon a time, I wrote a book I titled THE OBSIDIAN PYRAMIDS, which featured a villain named Ben Tobagho. In the first few drafts, though, his name was Don Tobagho.

When I started working on this project, I knew that creating interesting villains was one of my weaknesses. My previous antagonists were generally the old-timey, black-and-white, Lord of the Rings I’M EVIL BECAUSE I’M EVIL villains. So I decided to model the antagonist for this book after something I think is really shitty and terrible, and yet is something many people are attracted to for *somewhat* understandable reasons.

And so Don Tobagho was born. A populist leader who had genuine reasons to hate his own enemy, the “enemy of the people” in his own mind.

Now, the thing is, I chose his name only because it sounded dramatic in my mind. Months later, I realized I had heard a similar name, somewhere, sometime (while drunk, imagine that!). Doctor Mantis Toboggan was a pseudonym Danny Devito’s character, Frank Reynolds, played in one or two episodes of Always Sunny. I didn’t mean to steal any such name, it just happened.

Only trouble is, Don Tabagho’s initials are DT. I honestly didn’t even think about this until the third draft, when I considered how other people might view him as a stand in for POTUS. I try to make my books as apolitical as possible, even though I’m still going to take aspects from society that I find interesting. So Tobagho the villain stayed as he was, but Don became Ben.

I’ve written another book since then, with a different villain. I still hate populism, but just right now I’m probably more sympathetic to it than ever. I’ve been following the COVID-19 crisis to an obsessive level. Of course you have, too, but how many spreadsheets and python scripts do you have and update daily? I HAVE MANY MULTIPLE OF THEM.

A few weeks ago I started to record my current thoughts and projections, along with reasons for why I changed my mind on each day. I don’t think anything I’ve recorded looks embarrassingly bad, but here’s the thing: based on yesterday’s new info, I’m more uncertain than ever.

A large group of top-level researchers published a serological test study estimating that Santa Clara county had a COVID-19 prevalence of around 2.5%-4.5%. One of the most confusing elements of this whole thing for me is that this area’s official data show very low prevalence. Given the characteristics of the county, I thought it should be one of the hottest spots in the US, if not the hottest spot. And yet… almost nothing. Officially.

The authors of the paper claim the official data misses a massively large amount of cases. This may be true, but collecting this type of data is really difficult, and who the fuck knows if it’s correct or even means anything. Here’s good check on the issues with the study for anyone who’s interested.

So here’s my takeaway on all of this: not a goddamn one of us knows anything about this, other than that we don’t know much about it. Studying this thing is really hard. Different regions and populations will differ greatly. About the strongest conclusion I can draw from this is that the infection fatality rate (IFR) needs to be put in context. Given the age/health dependency of COVID-19 deaths, each country/state/region/city will be different.

Anywho, bringing this back to my main point about how populism sucks because experts are experts for a reason and science is awesome but some of us suck sometimes, and by that I mean all of us suck most of the time…

Nate Silver is maybe the best known “data scientist” in America. He clearly puts a lot of effort into what he does, but I’ve at times had issues with his methods and thoughts. I’m pulling this chart from his (not his alone, other smart cool people are working on this, too) well-known website: 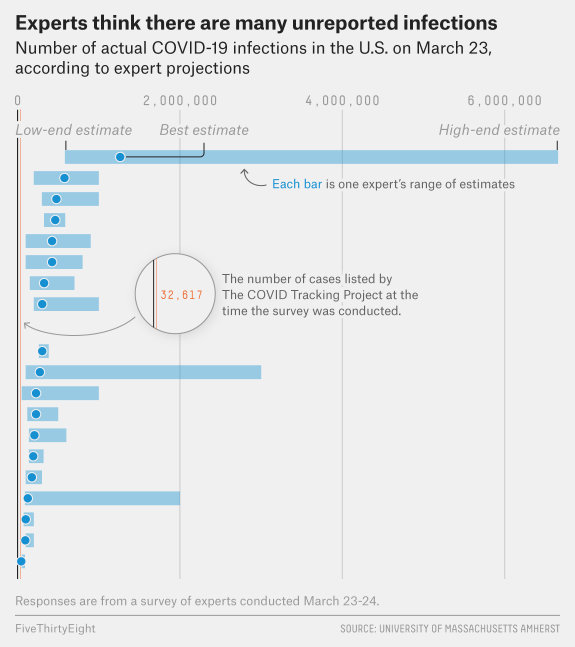 It’s now been long enough that, even as uncertain as things still remain, we have strong reason to believe these guesses are far too low. Given the death count (undercounted by some unknown amount) 21 days after the date given here (and assuming the average time from infection to death is about 3 weeks, again uncertain, but that’s my best guess as of now), the actual infection rate at this time would be over 2 million.

Now, it would be silly to criticize the “experts” for getting this wrong. I’m from the future here, and I still think the uncertainty on the actual infection prevalence here is really large. But here’s what these amazingly smart (ass) “experts” deserve criticism for, and why maybe, just maybe, we should possibly stop listening to (some of, not all!) these chuckle-fucks: look at the bottom half of that graph. A majority of these experts put their confidence intervals so tight that the best guess we have of the true number now – from the future, with much better information – is so far off that any person would have been willing to bet their life, and the life of everyone they care about, that it could never happen. And yet it appears that it has.

Less than a year before I defended my dissertation and received my PhD, I told my advisor I felt like I knew absolutely nothing. I was an arrogant ass going into college, even more so after I got my MS. And then after a few years working on my own little narrow corner of the research world, and seeing everyone else working on their own, I realized how little I actually knew. And the thing my truly wise advisor said to me when I told him that: that’s it, now you’re ready to become a doctor(ate).

It was a wonderful life lesson that required most of my twenties to learn. This jackass virus has made me feel it even more now than ever. But from goddamn near everything I’ve seen on social media and other sources such as FiveThirtyEight, a whole hella lotta people need to learn that lesson.

I don’t know if we can beat this virus until we do.

I’m a Portfolio Manager at a Commodity Trading Advisor (Crabel Capital), a Marquette grad, a Milwaukeean, an Angeleno, a nerd, and a (as yet unpublished) fantasy author. Follow @KevinIndrebo

An Irreverent and Insightful Blog about Wall Street

A Wealth of Common Sense

Small Steps Toward A Much Better World